Major operation to kick off against ISIS in East of Afghanistan: Ghani 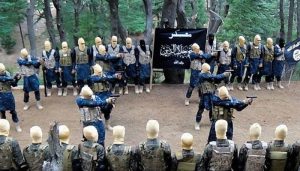 The Afghan President Mohammad Ashraf Ghani has ordered the Afghan National Defense and Security Forces (ANDSF) to launch a major offensive against the loyalists of Islamic State of Iraq and Syria (ISIS) terrorist group in eastern Nangarhar province.

President Ghani was speaking to the Afghan forces during a visit to Nangarhar province on Friady and said the main purpose of the operation would be to eliminate the loyalists of the terror group from Nangarhar.

He said the main focus of the annual Shafaq military operation, which is currently being conducted across the country, would be Nangarhar province from next week.

Qestioning the presence and participation of the loyalists of the terror group with the Afghan people, President Ghani ordered the 201st Silab Corps of the Afghan National Army to completely root out the terrorists from Nangarhar.

President Ghani further added that the difficult days in the country have gone but he cautioned that the enemies of Afghanistan are still plotting destructive activities.

He also visited the residents of Kot district and hailed for their resistance and fight against the loyalists of ISIS terrorist group.

The remarks by President Ghani comes as ISIS loyalists have been attempting to expand foothold in the country, an attempt that has forced the Afghan and US forces to step up strikes against them.

The US forces are regularly conducting drone strikes against the loyalists of the terror group in the restive parts of Nangarhar besides the Afghan forces conduct air and ground raids.