Major operation on the way in northern Faryab province 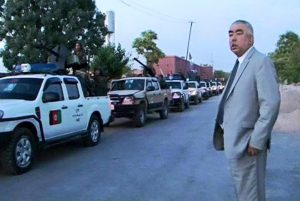 A major military operation is due to kick off in northern Faryab province of Afghanistan to clear the under the control of the Taliban militants.

The operation is expected to be launched jointly by the Afghan national security forces including Afghan special forces along with the anti-Taliban public uprising forces.

A lawmaker representing northern Faryab province in the Lower House of the Parliament – Wolesi Jirga, told Radio Free Europe (RFE) that the operation will be conducted as per the instructions of the First Vice President.

According to the local government officials, hundreds of the Afghan security forces and public uprising forces have been stationed in the volatile regions to start the operations and retake the areas under the Taliban control.

The Afghan Air Force has also deployed combat helicopters in the region where an airstrike was carried out on Friday, leaving at least eight senior Taliban members dead.

The local security officials said the airstrike was carried out as a number of the senior Taliban leaders had gathered to plan an attack on Kohistanat area of Faryab.

The special military operation will be conducted in Faryab province following a week deadline set by Gen. Dostum for the Taliban militants to surrender and join peace process.

Gen. Dostum said last week he is personally ready to go to the front line to fight the Taliban militants if the insurgency activities by the Taliban group persist.

During a trip to northern Faryab province of Afghanistan on the occasion of first day of Eid al-Fitr, Gen. Dostum promised to stand with the people of Faryab amid ongoing violence by the insurgents.

The acting provincial governor for northern Balkh province of Afghanistan Ata Mohammad Noor said Friday that joint operations will be launched to clear northern parts of the country from the militants.

Speaking during a ceremony to mark the first day of Eid al-Fitr in Mazar-e-Sharif city, Noor said the operations would be launched based on an agreement reached with First Vice President Gen. Abdul Rashid Dostum and Second Deputy CEO Haji Mohammad Mohaqiq.

The operations are being launched amid concerns that the former jihadi leaders are looking to create militia forces – a parallel force alongside the Afghan national security forces.

However, the office of Gen. Dostum dismissed the concerns and said the recent steps by Gen. Dostum are aimed at improving the security situation of the country and are taken in coordination with the Presidential Palace.