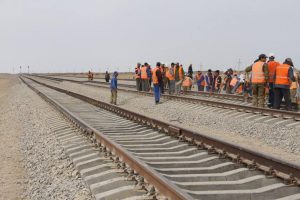 The Lazuli railway network is due to be inaugurated in the near future to link Afghanistan with the European countries and China via Central Asia.

Mohammad Shaker Kargar, the special envoy of the President for Commonwealth of Independent States (CIS), said the inauguration of the railway network will act as an alternative to link the country with the global market.

He said the railway network will resolve the inevitability the country is currently facing in terms of transit being dependent to other nations and will help expedite the transit process.

According to Kargar, the railway network will link Afghanistan with the European countries and China via Turkmenistan, Kazakhstan, Azerbaijan, Georgia, and Turkey.

This comes as the first ever cargo train from China arrived in the main Hairtan port located in North of Afghanistan on earlier last month, boosting hopes among the Afghan officials to find access to alternative routes for transit.

In the meantime, the construction of a railway line between Afghanistan and Iran officially kicked off near the western Herat province of Afghanistan last month.

Earlier this year the leaders of Afghanistan, India and Iran signed the Chabahr port agreement in Tehran, the capital city of Iran.

Afghanistan is expected to have sea-land access through the strategic Chabahar port in Iran by the end of this year as the work on the port already begun by a joint venture of Kandla Port Trust (KPT) and Jawaharlal Nehru Port Trust (JNPT) last year.