Large-scale operation kicks off against militants in North of Afghanistan 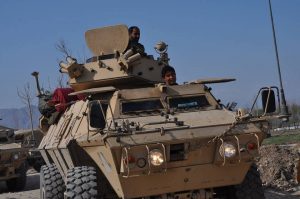 The Afghan armed forces launched a large-scale operation against the militant groups in northern Baghlan province of Afghanistan to suppress the militants who are attempting to expand their activities in this province.

The 209th Shaheen Corps of the Afghan military in the North said the operations, Alburz-22,  were launched earlier today in Dand-e-Shahabuddin area.

A statement by the Shaheen Corps said the Afghan forces are currenly conducting clearance and search operations in Baba Nazar and Khalazayi villages.

In the meantime, the Shaheen Corps said the anti-government armed militants have suffered heavy casualties during the operations in Kohistan district of Faryab.

According to the Shaheen Corps, several militants were killed or wounded during the airstrikes and efforts are underway to obtain further information regarding the casualties of the militants.

This comes as the Shaheen Corps said Saturday that at least two Taliban insurgents were killed and three others were wounded in the airstrikes in Qaisar district.

Faryab is among the relatively volatile provinces in northern parts of the country where the anti-government armed militants are actively operating in a number of its districts.

Several militants including key members and commanders of the anti-government armed militants were killed in similar operations in this province earlier this month.