Kunduz officials should be sentenced to death: Afghan Senate 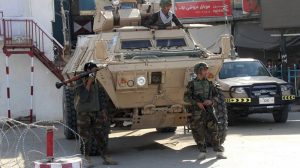 The lawmakers in the Upper House of the Parliament – Meshrano Jirga have said the local government officials in northern Kunduz province should be sentenced to death.

The call by the Afghan senators comes as the control of Kunduz city fell to Taliban militants after they launched a coordinated attack on the city in the early hours of Monday morning.

Military reinforcements were mobilized by the Afghan security institutions on Tuesday to retake the control of the city.

In the meantime, reports suggest the US and NATO forces have launched airstrikes against the Taliban militants in Kunduz city earlier today.

US Army Colonel Brian Tribus, the spokesman for the US and NATO missions in Afghanistan, told Al-Jazeera the raid was conducted “in order to eliminate a threat to the force”, though there were no foreign troops left inside the city.

A local security official confirmed late on Monday evening that the Taliban militants have taken control of the central prison along with the intelligence compound and the UN compound, provincial governor office and provincial police headquarter.

Gen. Murad said the Afghan security forces did not fully respond to Taliban attacks as the militants have taken positions in residential houses and markets.