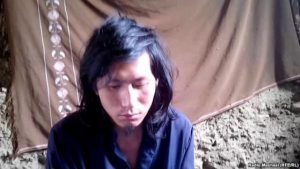 Mashal Radio that is related to Azadi Radio has received a video from the kidnappers of a Chinese tourist in Pakistan.

The video is sent to Mashal Radio today from an undisclosed location by a Saiful Asad who identifies himself spokesman for Jaish Al-Hadid “Contingent of Steel,”

The video purportedly shows the Chinese man Hong Xudong who was kidnapped by gunmen in May 2014.

Xudong who is seen alone in the video asks his government and International community to release him from the custody of Taliban.

He criticizes the government of Pakistan for not trying to secure his release.

He says that he does not believe in China-Pakistan friendship. He further says that Pakistan is only friend with money.

Xudong is looking scared in the video who says that Taliban have told him if their demands are not met he will be killed.

Hong Xudong was abducted  in Daraban area on the outskirts of Dera Ismail Khan district in Khyber Pakhtunkhwa on May 19, 2014.

Jaish Al-Hadid that claims to have the Chinese hostage seems to be a new name within the militant groups in Pakistan.

Newborn baby mauled by a dog in an Indian hospital

Indian police are conducting a comprehensive investigation of the allegations that a newborn died...

Opinion: Enraged Iran Up for asymmetric Warfare in Afghanistan

Tensions sparked the world as the US military assassinated the second most powerful Iranian, General Qasem Soleimani,...

Blast during a Taliban meeting in Pakistan kills 30 including ISI members: Sources

Pakistani paramilitary troops and an ambulance arrive at the site of bomb explosion in Quetta, Pakistan,...

The US President, Donald Trump once again praised the last Friday’s drone strike by US forces...