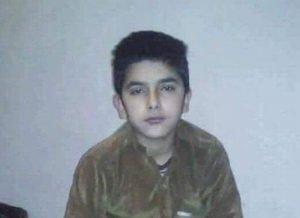 The authorities in Kabul on Sunday hanged the kidnappers and killers of a 2-year-old boy who was murdered in the city in a kidnap for ransom case last year.

The sources further added that the three men were sentenced to death by the relevant courts and the verdicts were implemented today.

The 12-year-old Abbasin was kidnapped from Kabul city nearly two years ago by a group of kidnappers who were apparently demangding a large sum of ransom for his release.

The National Directorate of Security officials said in late April 2016 that the Afghan intelligence operatives have arrested a group of 5 kidnappers involved in the brutal murder of Abasin.

The brutal murder of Abasin sparked anger among the Afghan people amid concerns that kidnap for ransom cases have increased during the recent months.

According to reports, the kidnappers had initially cut a finger of Abasin and demanded one hundred thousand US Dollars for his release.

This comes as there has been a sharp rise in criminal-related incidents in Kabul city and other key cities of the country during the recent years.

Earlier, a woman was arrested by police in Kabul on charges of kidnapping a 5-year-old child and was demanding a hefty amount of money against the release of the hostage.

The Criminal Investigation Department (CID) officials said late in December that the woman was arrested during an operation from the 13th police district of the city.

The officials further added that the child who was kidnapped from the vicinity of the 6th police district of the city was also recovered from the custody of the woman.

According to the CID officials, the woman was demanding a ransom of 500,000 Afghanis against the release of the child.