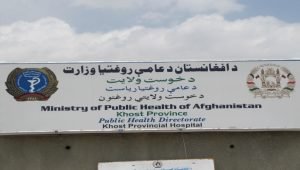 The director of the Public Health Directorate of Khost province wounded after armed men failed to kidnap him this morning.

Mohammad Hashim Sayedi was on his way from his residence to Matun, the capital city, when gunmen stopped his vehicle and asked him to go with them.

Upon the refusal a scuffle happened during which one of the kidnappers fired his weapon and hit the director in the back.

The gunmen then fled the area and Sayedi was shifted to the provincial hospital.

Governor of Khost province has condemned the attack and ordered security institutions to arrest the attackers.

Motive behind the attack is unknown.

Khost is among the relatively volatile provinces in southeastern part of Afghanistan where anti-government armed groups including the notorious Haqqani network are actively operating in a number of its districts but they occasionally carry out attacks in the provincial capital Matun as well.