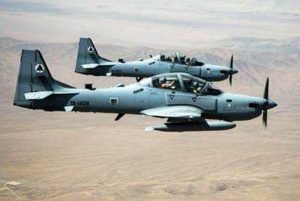 A prominent local leader of the Taliban group was killed in an airstrike in southern Kandahar province of Afghanistan, the Afghan military officials said Monday.

The Taliban leader, Mullah Lal Mohammad, was killed late on Sunday night in the vicinity of Nish district.

The 205th Ata Corps officials in the South said at least eleven militants were also wounded during the airstrike conducted by the Afghan Air Force late on Sunday night.

This comes as counter-terrorism operations are underway against the militants in certain districts of Kandahar province.

The Afghan Special Operations Forces stormed the hideouts of the Taliban group in this province late on Friday night heavy casualties on group’s militants.

Provincial Police Chief General Abdul Raziq said Saturday that the raid was conducted in the vicinity of Maiwand district.

Gen. Raziq further added that the Special Operations Forces stormed at least ten hideouts of the group in Sar Baghal area of the district.

According to Gen. Raziq, at least thirty militants were killed and at least ten others were wounded during the operation.