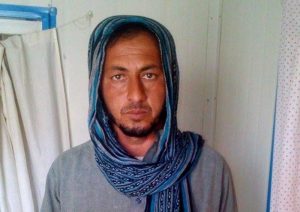 A key local commander of the Taliban group has been arrested during an operation of the Afghan national defense and security forces in eastern Nangarhar province.

According to the local officials, the Taliban local leader was arrested during an operation of the Afghan police forces in Chaparhar district.

The provincial police commandment in a statement confirmed the arrest of the local Taliban commander saying the detained individual has been identified as Bismillah also famous as Ayoubi.

The statement further added that Bismillah was in charge of a group of at least twenty Taliban fighters and actively involved in major terrorist related activities in Chaparhar and other parts of the province.

Bismillah was operating under the leadership of the Taliban group leader Ghazi Mansoor, the police commandment said, adding that he has confessed to his crimes and regrets for the killing the civilians and having role in other destructive activities.

This comes as the local officials said Sunday that the deputy shadow district chief of the Taliban group for Sri Rod was killed during an operation of the Special Forces of the National Directorate of Security.

The officials further added that Qari Daud during a night raid of the Special Forces late on Saturday night in Sri Rod district and as a result two militants were also arrested.