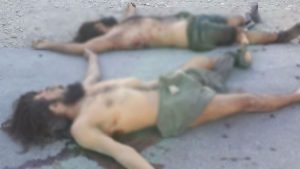 Two key leaders of the Islamic State of Iraq and Syria (ISIS) terrorist group’s offshoot in Afghanistan, ISIS Khurasan, were killed during the clashes with the security forces in eastern Nangarhar province of Afghanistan.

The provincial police commandment in a statement said the incident took place   late on Monday night in the vicinity of Haska Mina district after a group of insurgents launched an attack on the security posts and local houses.

The statement further added that one of the ISIS leaders killed during the clash has been identified as Khushal also famous as Hadi who was the military chief of a group of at least twenty ISIS insurgents in the area.

According to the police commandment, the ISIS militants have also set on fire two houses of the local residents but no casualties were inflicted to the residents and security personnel.

This comes as anti-ISIS operation is under in Nangarhar province as the Afghan and US forces conducted regular strikes against the loyalists of the terror group.