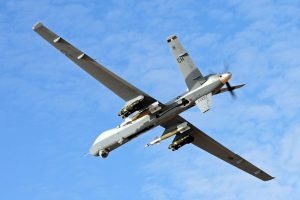 At least eleven fanatics of the Islamic State of Iraq and Syria (ISIS) terrorist group were killed in an airstrike in eastern Nangarhar province of Afghanistan, local officials said.

The airstrike was carried out in Achin district of Nangarhar with the help of an unmanned aerial vehicle (UAV).

The district administrative chief Ghaleeb Mujahid confirmed that eleven loyalists of the terror group including one of their key commanders were killed in the raid.

He said another key commander of the terror group was also among those killed.

Nangarhar is among the relatively volatile provinces in eastern Afghanistan where anti-government armed militant groups including the fanatics loyal to the ISIS terror group are actively operating in a number of its remote districts.

This comes as at least 10 loyalists of terror group was killed in a separate airstrike carried out by the Afghan Air Force (AAF) targetting a gathering in Kot district.