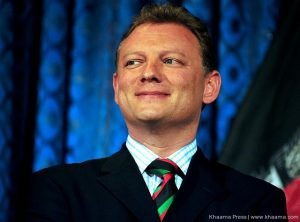 After three years as the Spokesman for the NATO Senior Civilian Representative in Afghanistan my time has come to move on from my current position. I have worked in Kabul for more than 11 years, since February 2002, but I am sure I will return.

I first came to Kabul, just three months after the fall of the Taliban regime. The city was so different then, so run down, so destroyed in many areas. Today I see repaired streets (even though we all complain about the road repairs), solar powered lighting, more shops and businesses, and yes a far larger population that is putting a strain on Afghanistan’s historic capital city.

Everyone is using a mobile phone, or two or three, watching television and far more people are rushing about their daily lives trying to make a living. One of the best sights is always seeing young children, especially girls, on their way to school or university students lounging around the campus grounds. The thirst of Afghans for education, the respect Afghans have for their teachers, can only bode well for the future for the new young generation. And the new generation must include more women; a country cannot thrive without including more than 50% of its population.

The youth of Afghanistan are doing so much for their country. I remember the first athletes who attended the Athens Olympics in 2004 and then in China and then last year in London. The Afghan cricket team has been a rising phoenix around the world competing in major international matches. Music and film has taken off in Afghanistan like never before. The flag of Afghanistan flies around the world. Even now I always search out an Afghan restaurant or embassy when I travel. Afghanistan’s historic treasures have been touring the world’s museums and the Kabul Museum has to be one of the most enjoyable experiences in Kabul along with Babur Gardens.

The occasional high profile attacks in the city are still a concern. I don’t feel there are as many as there used to be a few years ago. Even in September 2002 I remember a bad bombing outside the Ministry of Information and Culture and in 2004 the horrendous car bomb near Ansari Square. What’s different now is the quick response of the Afghan Security Forces. They won’t able to stop every attack, you never can, but they will be able to contain the attacks and stop them killing even more civilians.

It’s important to mention the sacrifices of so many who have given their lives to help and protect Afghanistan. In Britain the famous Help for Heroes organisation has inspired my country and helped wounded troops and their families for the last six years. I know Afghanistan remembers its martyrs. I also recall journalists who have been killed, like Zakia Zaki of Radio Solh and Ajmal Naqshbandi, and I pray for the many foreign friends I know who have died in Afghanistan. The tragic loss of life must never be forgotten.

And so on a professional level representing NATO for three years, I can say that NATO has stated many times that the Afghan National Security Forces are capable and growing in experience. Afghans can be proud in how far their forces have come in the last few years. At the same time the NATO commitment to Afghanistan will be enduring with the new mission, Resolute Support. NATO will remain committed to Afghanistan. NATO will not abandon Afghanistan and NATO will have a long term friendship with Afghanistan.

Personally, I also know from my long time here and from Afghan friends, that there is no going back to the dark days Afghanistan experienced. We may all be impatient for change, bemoaning why some things take longer than we want, efforts will always be challenged and sometimes thwarted. But the only way, the only course and option, is to keep moving forward; to strengthen the partnership and to build on the achievements and progress made together since 2002. It is ultimately up to all Afghans to seize on the opportunities that have been created in the last decade and lead the country forward. With the support of friends, Afghanistan can craft a better and brighter future.

Dominic Medley has just completed three years as the Spokesman for the NATO Senior Civilian Representative in Afghanistan.