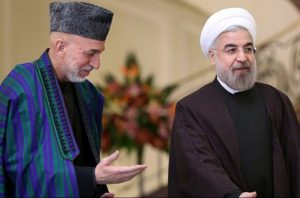 The former Afghan President Hamid Karzai visited Iran and criticized the US counter-terrorism mission in Afghanistan as he was speaking during a conference in Tehran.

The office of the former President, ARG Palace, in a statement said the former president in his speech at Institute for politicla and international studies, said the US counter-terrorism policy in Afghanistan has not only resulted into eradicationof terrorism but has resulted into more violence led by the other terrorist groups, including the ISIS group.

Karzai further added that the US forces arrived in Afghanistan to fight terrorism with the support of the international community and regional countries.

However, he said if the US policies have failed, then Washington should start negotiations with the other countries and powers, including China, Russia, Iran, and India to resolve the issue.

He also insisted that the main and key issues of the country should be discussed in the traditional Loya Jirga, grand council of the tribal elders, and the Afghan people should decide regarding their future and fate.

The former president also called on the Afghan government to take immediate actions to pave the way for convening a traditional Loya Jirga to discuss the ongoing issues.