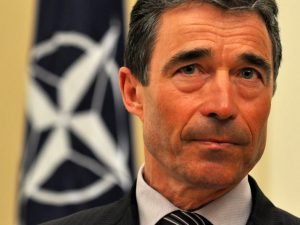 While speaking to reporters during the annual Munich Security Conference, Rasmussen, said president will most probably leave the choice of signing the bilateral security agreement to his successor.

Rasmussen said NATO is prepared to stay in Afghanistan beyond 2014, if the bilateral security agreement between Kabul and Washington, and a similar pact between the Afghan government and NATO was signed.

He said, most probably it will be for a new president to sign a security agreement, however, he warned that NATO will also be prepared to withdraw everything by the end of 2014, if the agreement was not signed by the new president.

This comes as Afghan president Hamid Karzai has refused to sign the bilateral security agreement between Kabul and Washington and has said that he will not sign the agreement unless certain conditions are met.

The agreement between Kabul and Washington, once signed will also pave the way for the singing of a similar pact between Afghan government and the NATO alliance.

The agreement will provide a legal framework for the NATO member countries to keep a small force in Afghanistan beyond 2014 to train and advise Afghan national security forces.