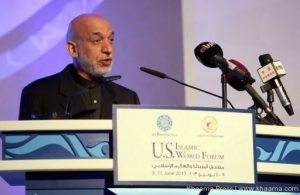 Afghan president Hamid Karzai on Sunday attended the 10th US-Islamic World Forum hosted by the Brookings Institution in association with the Ministry of Foreign Affairs of Qatar.

While delivering keynote address at the opening of the 10th US-Islamic World Forum at the Ritz Carlton Doha, president Karzai said that the West led by the United States needs to explain to the Muslim world that it dealt with the Israel-Palestine issue impartially and it wholly respected the aspirations of the Palestinians for an independent and sovereign state, that stands side by side with Israel.

President Karzai also insisted that the Muslim world needs to demonstrate its tolerance to the rest of the world in reciprocity to the good intentions and initiatives of the United States to reach out to the members of the Muslim community all over the world.

Karzai also said that the Muslim world was “in turmoil” and wondered whether the “war on terror” led by the United States since 2001 was to blame for the radicalisation.

He said, “The war on terror as it began in 2001 and moved forward until today has not been a happy one.”

“Did we address the sanctuaries of terrorism? And by waging this war on terrorism, have we brought less radicalism to the Muslim world, or caused more radicalism?” Karzai said adding that “Today, the Muslim world is in turmoil from Pakistan up to Nigeria.”

President Karzai also stressed that, “In my view, the West as led by the US needs to explain itself to the Muslim world.”

The 10th annual US-Islamic World Forum begun on Sunday and was organised jointly by Brookings Project on US Relations with the Islamic World and Qatar, the three-day conference will conclude on June 11.

It will focus on the conflicts in Afghanistan and Syria, political change in Pakistan and a number of Arab nations, as well as the need for greater economic opportunity within the world’s emerging democracies.