Karzai says he strongly opposes the new strategy for Afghanistan 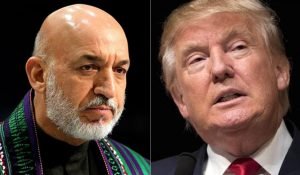 The former Afghan President Hamid Karzai has said he strongly opposes the new strategy of the United States for Afghanistan and Central Asia.

The former President in a statement said “I very strongly oppose the new U.S. strategy towards Afghanistan as it is against peace and the national interest of Afghanistan.”

President Trump on Tuesday unveiled the new strategy of the United States for Afghanistan and South Asia.

He said his original instinct was to pull out however he said after detailed study of the situation he arrived at three fundamental conclusions.

“First, our nation must seek an honorable and enduring outcome worthy of the tremendous sacrifices that have been made, especially the sacrifices of lives.  The men and women who serve our nation in combat deserve a plan for victory.  They deserve the tools they need, and the trust they have earned, to fight and to win,” he said.

President Trump further added “Second, the consequences of a rapid exit are both predictable and unacceptable.  9/11, the worst terrorist attack in our history, was planned and directed from Afghanistan because that country was ruled by a government that gave comfort and shelter to terrorists.  A hasty withdrawal would create a vacuum that terrorists, including ISIS and al Qaeda, would instantly fill, just as happened before September 11th.”

He said “Third and finally, I concluded that the security threats we face in Afghanistan and the broader region are immense.  Today, 20 U.S.-designated foreign terrorist organizations are active in Afghanistan and Pakistan — the highest concentration in any region anywhere in the world.”