Karzai reiterates his stance regarding the Durand Line 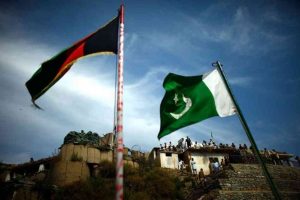 The former Afghan President Hamid Karzai reiterated his stance regarding the controversial Durand Line separating Afghanistan and Pakistan, insisting that he has never and will never accept the line as the formal border between the two nations.

Speaking during a press conference in Kabul today, Karzai said we want good relations and friendship with Pakistan but the Afghan nation will never accept Durand Line as the formal border.

In other parts of his speech, Karzai said such claims are baseless and are not true that twenty terrorist groups are operating in Afghanistan.

However, he expressed concerns regarding the deployment of ISIS fighters by alien helicopters.

The former Afghan President asked the United States to help and provide information regarding such movements.

This comes as Karzai earlier accused the US forces in Afghanistan for aiding the loyalists of the Islamic State of Iraq and Syria (ISIS) terrorist group.

In an interview with the Russia Today and in response to a question whether there was any suspicion that the US was aiding ISIS group, Karzai said “I have more than suspicions.”

However, he said reports regarding the alleged support to ISIS by the US forces are still unconfirmed.

Karzai said he had heard reports, albeit unconfirmed, that the IS was being supplied with helicopters.

The former President further added “How unmarked non-military colour helicopters supply these people, not only in one part of the country but in many regions.”

“And this is a daily occurrence,” he said, claiming that the terror group has been able to spread its tentacles in the country just under the nose of the US forces and the CIA.