Karzai not running for the president in 2019 presidential elections, claims Tahyanj 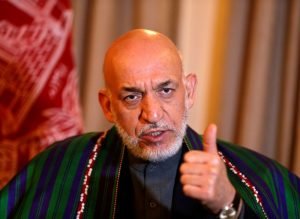 The former Afghan President Hamid Karzai is not running for the president during the 2019 presidential elections, sources close to him have said.

Bashir Ahmad Tahyanj, a spokesman for Junbish Milli party and member of the Grand National Coalition, said the former President informed regarding his decision during a meeting with the political leaders in Kabul.

Tahyanj further added that the former President made it clear that he will not for the president again under any circumstances, emphasizing that he has already served and dealt with the issues and responsibilities of the government for at least 14 years.

This comes as Karzai had earlier said that he was not keen but would consider nomination in the upcoming elections provided that the political parties agree with him and that no other options are left to resolve the issues of the country.

Karzai made the remarks during an interview with the Spiegel Online nearly two months ago as he answering questions regarding the upcoming elections.

He emphasized that the constitution of the country allows two terms for an individual to serve as the president.

Insisting that he has already served as the president of the country for two terms, Karzai said he would prefer not to compromise with the legacies he has left behind.