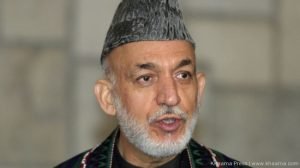 This is the first by Afghan president Hamid Karzai to Pakistan following the formation of the new Pakistani government, and election of Nawaz Sharif as the new Prime Minister of Pakistan.

President Karzai during his visit to Pakistan will mainly focus on Pakistan role in Afghan peace process, and will press Nawaz Sharif to release Taliban leaders in a bid to accelerate Afghan peace talks.

Before leaving Kabul for Islamabad, president Karzai told reporters that the first item with Pakistan will be the peace negotiations.

He said the Afghan government is hopeful of Pakistan’s cooperation in Afghan peace talks, but not sure. “I wil go only with hopes, and wish they materialise,” Karzai told reporters.

Other bilateral related issues including economic and trade ties will also be discussed during president Karzai’s visit to Pakistan, as Pakistan is keen for more trading opportunities and strategic supply routes through Afghanistan.