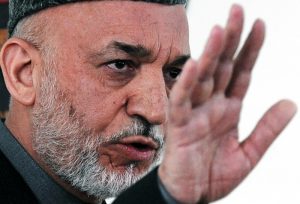 The former Afghan President Hamid Karzai had ordered the security officials not to attack the training centers belonging to the Taliban militants in central Logar province, it has been reported.

According to the local security officials quoted by BBC, the former president had ordered to prevent military operation on the training center despite the Taliban militants were using the center as launching pad for suicide attacks in Logar and capital Kabul.

Provincial police chief Gen. Daud Ahmadi said around 200 militants were trained by militants hailing from Pakitan and Chechnya in the training center.

He said the training center was located in Zarghoon city but the Karzai had ordered that no military operation should be launched by issuing a written order.

Gen. Ahmadi further added that the main motive behind Karzai’s decision to prevent the operation while he was serving as the President of the country has not been ascertained so far.

Neither the former president nor the officials close to him have commented regarding the report so far.

According to Gen. Ahmadi, at least 27 Taliban militants were killed and 33 others were injured after the security forces launched an operation on the training center by receiving orders from the security council recently.

He said caches of weapons, ammunition and trucks loaded with explosives were confiscated during the operation besides the security forces discovered documents from the compound.