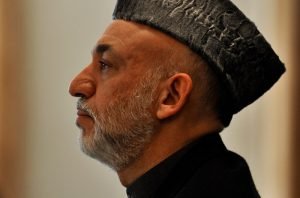 The former Afghan President Hamid Karzai reacted towards the US President Barack Obama’s decision to extend the presence of US forces in Afghanistan, saying the presence of foreign forces only resulted to worsening situation in the country.

The statement by the former president is in contrast with the statement of the Afghan government officials who welcomed decision by Obama to keep more troops in Afghanistan.

“The Afghan people agreed with the sustained presence of foreign forces 14 years ago with a hope to eliminate terrorism and maintain peace in the country,” Karzai said in a statement.

The statement further added “But the presence of foreign forces under the name of fight against terrorism not only resulted to elimination of terrorism but during this period terrorism gained further strength.”

Karzai also criticized the way the announcement was made by President Obama and said the US President mentioned regarding the ‘Uncommon Phrase’ of fighting seasons, which according to Karzai means that the war will continue for a long period of time and that the Afghan people should expect this.

According to Karzai, the Taliban militants waged war and violence in villages and cities of the country in order to pave the way for the presence of foreign forces in the country.

Karzai said the Afghan people will accept the presence of foreign forces only if it results to maintain peace and stability and their sovereignty and national unity are not harmed.

One thought on “Karzai: ‘Foreign forces presence only resulted to worsening situation in Afghanistan’”