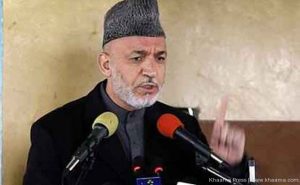 Provincial officials quoted in the statement, said, “The air strike was carried out on Monday in Shindand district of Herat province, leaving four people killed including a woman and a child.”

Denouncing the incident in the strongest terms, President Karzai said, “Any military operations by the foreign forces, targeting civilians and residential areas in Afghanistan means that they do not value Afghans’ lives as well as it is a clear violation of bilateral agreements”.

The statement further added that local authorities were instructed by President Karzai to immediately launch probe into the incident and assist with the families of the victims.

President Karzai offered his deepest condolences and sympathies to the bereaved families.

The NATO-led International Security Assistance Force (ISAF), said, “We are aware of allegations regarding reported civilian casualties in Shindand District of Herat Province in the past 24 hours.”

The alliance following a statement said, “ISAF takes all allegations of civilian casualties very seriously, and is assessing the facts surrounding this incident. We are working hand-in-hand with Afghan authorities to resolve this as quickly as possible. We will release more information as appropriate.”