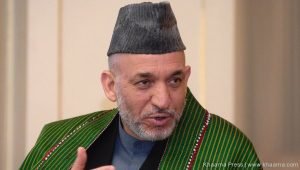 Presidential Palace media office following a statement said, “President Hamid Karzai spoke on telephone with Bill Gates, the founder and head of the Bill & Melinda Gates Foundation to discuss the need to enhance efforts to eradicate polio in Afghanistan.”

President Karzai and Mr. Gates agreed that the polio routine immunization needed to be further intensified.

The statement further added, “The President stressed that in order to maximize the effect of the anti-polio campaign, quarterly meetings were important to be held with the governors of the provinces, still hit by the viral disease.”

The Bill and Malinda Gates Foundation runs projects to eradicate polio throughout the world and has been helping efforts to fight the fatal disease in Afghanistan and Pakistan.

Bill Gates has called on the developed world to “get serious” about eradicating polio in Afghanistan and Pakistan as one of the most productive ways of stabilising the region.

Mr Gates, who has pledged $US 10 billion towards vaccine work over the next decade, will make a series of announcements this week in support of the drive to eradicate polio. The area of Afghanistan and Pakistan is one of only three regions in the world where the virus remains endemic.