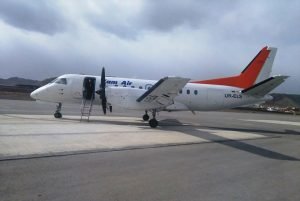 A commercial airline has started direct flights between Kabul and the central Bamyan province, the local officials said Wednesday.

The first flight by Kam Air carried passengers from capital Kabul to Bamyan province using Saab 340 aircraft, a Swedish twin-engine turboprop aircraft that can carry up to 40 passengers.

Deputy provincial governor Mohammad Asif Mubaligh welcomed the opening of the new route to Bamyan province by Kam Air, saying the local authorities are hopeful that the move will encourage other airlines to start services in this province.

Speaking during a ceremony for the launch of the flights by Kam Air, Mubaligh said the start of the flight will also help reduce the ticket fares.

Bamyan is located in central parts of the country and is among the relatively peaceful provinces where terrorist related incidents are rarely reported.

However, the main route connecting Kabul to Bamyan province has been at all time volatile during the recent months where numerous kidnapping cases have been reported.

The anti-government armed militants are often stopping passenger cars in the route through Maidan Wardak province and kidnap the travellers.

Scores of passengers have been abducted during the recent months by anti-government armed militants amid deteriorating security situation and several of them have been killed by the militant.