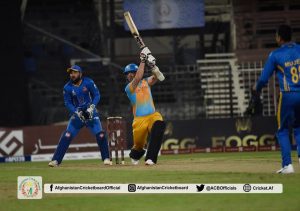 The Kabul Zwanan cricket team defeated Nangarhar Leopards by 7 wickets during a match of the Afghan Premier League match on Tuesday.

The Nangarhar Leopards set a target of 189 runs after Kabul Zwanan won the toss and elected to field first.

Devcich scored the highest runs of 94 for Nangarhar while Najibullah Tarakai scored 42 runs.

Rashid Khan took 1 wicket on the bowling side from 4 overs where he gave only 13 runs while Shahidllah Kamal, Jawid Ahmadi, and Farid Malik each took one wicket as well.

The Kabul Zwanan managed to chase the given target during the 17.4 over of the game by losing 3 wickets with Hazratulalh Zazai scoring 124 runs from 55 balls.

Ben Cuttings, Zahir Khan, and Rahmat Shah each took one wicket for Nangarhar Leopards on the bowling side.

Hazratulalh Zazai was awarded the man of the match award for his outstanding performance on batting side. He scored 124 runs from just 55 balls.

Qatar 2022 will make history as the first men’s FIFA World Cup to have female referees in...