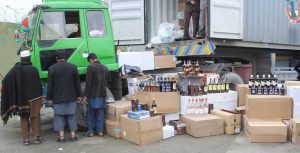 Major General Abdul Rahman Rahimi, Kabul Police Chief added that the drinks were being brought to Kabul from Pakistan in a trailer vehicle.

Three suspects were detained with the truck (registration number 0412) in Pul-i-Charkhi area and police said two of them are from Pakistan.

“Police HQ of 101st Asmayee Zone of Kabul would not spare any efforts to arrest drug dealers in Kabul city,” the police chief warned drug dealers.