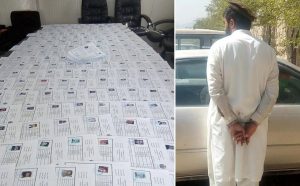 The police forces in Kabul have arrested a man and confiscated at least four hundred fake National Identity Cards (Tazkiras) which were being smuggled to the capital with the intent to use during the upcoming elections.

The Ministry of Interior (MoI) in a statement the suspect was arrested during a search operation from the vicinity of Pul Charkhi of Kabul.

The statement further added that the suspect was looking to smuggle the fake National Identity Cards from Kapisa to Kabul.

No further details have been given in this regard but the Ministry of Interior added that an investigation is underway from the detained suspect.

This comes as the officials in the Attorney General’s Office had earlier said at least 85 people have been arrested from various parts of the country for forging National Identity Cards.

The officials, political parties, and candidates have also expressed concerns regarding the use of fake National Identity Cards during the upcoming parliamentary and district council elections.

However, the Independent Election Commission had earlier said that stickers have pasted to the original national identity cards of the voters to prevent fraud during the elections.