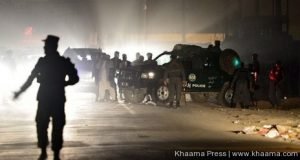 According to reports, Nesar Ahmad Habibi not inside the vehicle when the incident took place and only the driver of the vehicle was injured following the explosion.

He was due to visit Bot Khak area along with a group of municipality workers.

It was the second explosion which took place on Sunday in capital Kabul. At least six people including Afghan national army officers were killed or injured after an explosion took place in Arzan Qeemat area of Kabul city on the same day.

A 7-year-old girl was killed and five Afghan national army officers were injured after the vehicle of Afghan army officers struck with a roadside bomb.