Kabul cleric under fire for endorsing murder and burning of woman 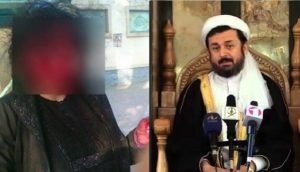 An Afghan cleric Maulavi Ayaz Niazi has been under fire for publicly endorsing the brutal murder and burning of a woman over alleged burning of holy Quran.

Maulavi Niazi endorsed the murder of 27-year-old Farkhunda while speaking among the participants of Friday prayers and a day after she was lynched by Kabul mob.

Niazi had warned of an uprisal and urged the government not to arrest those who lynched and burnt Farkhunda. While, Stanikzai wrote on his Facebook page that Farkhunda “hought, like several other unbelievers, that this kind of action and insult will get them U.S. or European citizenship. But before reaching their target, lost their life.”

Maulavi Niazi and the two government officials came under fire soon after the Ministry of Hajj and Religious Affairs rejected that Farkhunda had torched the holy Quran.

Hajj and Religious Affairs Ministry officials said no proof was found to prove that such incident had taken place and insisted that some books with Persian transcripts were found torched.

Farkhunda was laid to rest in Kabul today with hundreds participating in the funeral ceremony. The coffin of Farkhunda was carried to the burial site by women in what is said to be a historic move by the Afghan women.

The brutal murder of Farkhunda was widely condemned with President Ghani ordering an immediate probe into the incident.

The United Nations condemns also condemned the brutal murder of the woman in the strongest terms. “We are particularly worried by reports that the woman had suffered from mental illness for many years,” said Elzira Sagynbaeva, the Country Representative for UN Women in Afghanistan. “We are encouraged by initial reports of the arrest of several suspects, but call on the authorities to investigate this incident fully and bring to justice all persons who actively participated in the killing, or aided and abetted it.”