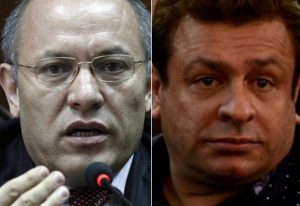 The former Chief Executive and shareholder of Kabul Bank Khalilullah Ferozi has been transferred to Kabul for the treatment purposes, days after the chairman of the bank Shir Khan Farnood died in the same prison.

Sources in the family of Ferozi confirmed that he has been shifted to Kabul from Bagram prison.

The family members of Mr. Ferozi say he is suffering from acute diabetics disease and was shifted by the Ministry of Defense to Sardar Mohammad Daud Khan hospital after his condition worsened.

Informed sources on Friday confirmed that Mr. Farnood has died at the age of 57 in Bagram prison due to the illness he was suffering from.

Kabul Bank was seized by the government in 2010 after the exposure of a staggering $900 million fraud, which led the International Monetary Fund to temporarily halt its hundreds of millions of dollars of loans to the country.

Both Sher Khan Farnood and Khalilullah Ferozi were sentenced to ten years in jail by the Appellate Court nearly four years ago after they were found guilty of involvement in the embezzlement of the bank’s funds.