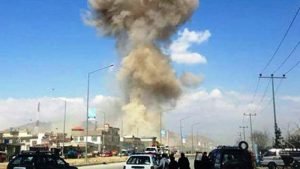 The casualties toll from coordinated suicide attacks in capital Kabul has climbed to at least 22 dead while nearly 120 others have sustained injuries.

The officials in the Ministry of Public Health of Afghanistan (MoPH) have said ordinary civilians are also among those killed or wounded.

He said around 120 others sustained injuries including civilians.

The Taliban group claimed responsibility behind the attacks which was widely condemned with the Afghan government saying the group is attempting to boost the morale of its fighters by conducting attacks in crowded places.

The attack was initially launched in the vicinity of the 6th police district of the city after a car bomb was detonated to allow the remaining insurgents infiltrate inside the PD#6 compound.

The gun battle between the Afghan security forces and the assailants continued for several hours before the compound was cleared of the militants.

The second attack took place in the vicinity of 12th police district of the city but it was shortly brought under the control by the security forces.