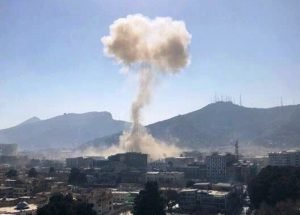 The Afghan minister of interior Wais Ahmad Barmak says the death toll from yesterday’s suicide attack has climbed to at least 103 people.

Barmak disclosed the latest death toll as he was speaking during a press conference in Kabul today.

He said at least 235 others have also sustained injures and the the Afghan police forces have sustained heavy casualties in the attack.

The minister of interior did not disclose exact information regarding the number of the police personnel who have lost their lives in the attack.

According to Barmak, the militants had disguised themselves inside two ambulance vehicles and managed to pass through one of the check posts close to the old building of the ministry of interior.

He also added that the militants had taken the vehicles in the compound of the Jamhoriat hospital and after almost 20 minutes detonated the vehicle packed with explosives.

Barmak also ruled out that the security personnel had committed any negligence but did not elaborate further saying more details would hinder the ongoing investigations.

The Taliban militants group claimed responsibility behind the attack which was the second deadliest taking place in the city over a span of a week.