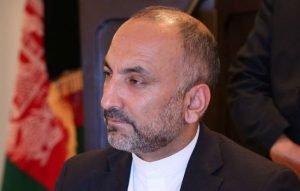 The National Security Adviser Mohammad Hanif Atmar has called on the religious scholars of the Sunni and Shia Muslims to recognize the enemies of the unity of the Afghan nation as a deadly attack ripped throug a gathering in a shrine in capital Kabul.

Condemning the attack in strongest words, Atmar said “We request Sunni and Shia and the Muslim people of Afghanistan to recognize the enemies of our unity, empathy and stand firm against them.”

He said “The brutal attack on Ashura mourners at Karte Sakhi shrine is an unforgivable crime carried out by terrorists.”

The attack on the shrine was launched around 7:20 pm on Tuesday night after a number of gunmen stormed into the gathering and started indiscriminate firing on the mourners.

The security officials said at least 14 people including women and children were killed and scores of others were wounded in the attack.

The clearance operations continued for several hours before the Afghan security forces managed to eliminate the assailants who had taken position inside the shrine.

No group has so far claimed responsibility behind the attack with the Taliban group immediately distancing itself from the brutal raid.

The attack sparked anger among the Afghan people who condemned in strongest words and called the raid an attempt to spark ethnic and religious tensions among the people.