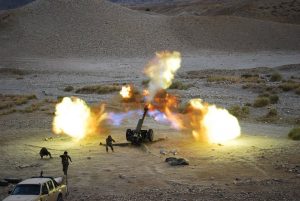 The Afghan security forces managed to retake the control of Jani Khel district in southeastern Paktia province after almost ten days of heavy fighting that inflicted heavy casualties both the Taliban insurgents and the security forces.

The provincial governor’s spokesman Abdullah Hasrat confirmed on Friday that the control of the district center of Jani Khel has been recaptured.

He said over 140 insurgents were killed and more than 120 others were wounded during the clashes.

Hasrat further added that around 20 Pakistani militias were also among those killed during the clashes with the security forces.

According to Hasrat, the Afghan security forces also lost at least 13 members and around 17 others were wounded during the clashes.

The Taliban insurgents captured the control of the district center of Jani Khel around ten days ago after launching a major attack on the security check posts.

Paktia is located along the Durand Line close to the tribal regions of Pakistan which is home to several anti-government armed militant groups including the Taliban and Haqqani network insurgents.