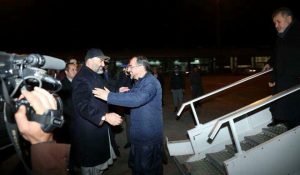 A delegation of senior Jamiat-e-Islami members arrived to northern Balkh province hours after Ata Mohammad Noor announced his decision to continue to his work as Balkh governor.

According to an official statement, the delegation led by Salahuddin Rabbani comprised of a number of other senior members of the party including Bismilah Mohammadi and Jan Ahmad Haqjo.

The statement further added that the delegation will hold talks with Noor regarding the recent political situation of the country.

In the meantime, Noor in a statement said the Jamiat delegation held talks on recent political upheavals, the stance of Jamiat-e-Islami, and the future agenda of the party.

Noor said none one can dismiss him as the governor of Balkh province by issuing a decree, insisting that the political party he is representing is one of the main sides which played a key role in the formation of the government of national unity.

He said the presidential elections in 2014 was one of the worst elections the country and was marred massively by fraud by it was the Jamiat-e-Islami which gave a legitimacy to the process.

He said the Jamiat party is the main piller of the unity government and no one can sideline him as an ordinary government employee, emphasizing that he will continue to his work as the governor of the Balkh province in a bid to prevent the spread of the Taliban and ISIS in Balkh.