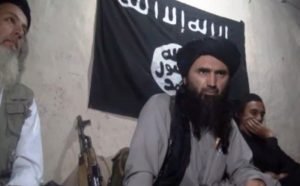 The Islamic Movement of Uzbekistan (IMU) declared as a terrorist organization by the United States has declared it is now part of the Islamic State of Iraq and Syria (ISIS) terrorist group.

The group has recently released a video which purportedly shows the group’s leader Usmon Ghazi and his fighters taking oath of allegiance to ISIS terror group and its leader Abu Bakr al-Baghdadi.

The latest video by IMU with a length of 2 minutes 36 seconds, shows the group’s leader Ghazi claiming that they are not just a movement but a state.

The video also purportedly shows scenes from Afghanistan but the exact location has not been ascertained so far.

This comes as Ghazi issued a statement last year declaring support to ISIS terrorist group, however he fell short of using the word Baya which would indicate a pledge of allegiance.

Another militant leader identified as Sadullah Urgenji also issued a video statement in March this year claiming that the group fights for IMU in northern Afghanistan.

Urgenji said his group was recognizing the authority of ISIS leader Baghdadi while pledging allegiance to the terror group.

The allegiance by IMU to ISIS terrorist group comes shortly almost two weeks after the death of the Taliban supreme leader Mullah Mohammad Omar was confirmed.

IMU issued a statement earlier this month demanding clarification from the Taliban regarding Mullah Omar’s death while accusing the group lying his death.