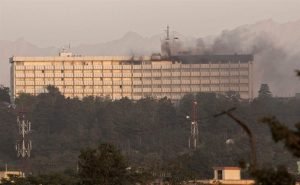 The Pakistani government officials reacted at the allegations suggesting that the Pakistan-based Haqqani terrorist network was involved behind the deadly attack on Intercontinental Hotel in Kabul.

“We reject the knee jerk allegations by some Afghan circles to point the finger at Pakistan for the terrorist attack on intercontinental hotel in Kabul,” a spokesman for the Ministry of Foreign Affairs of Pakistan Dr. Mohammad Faisal said.

He also added “There is need for a credible investigation into the attack, including on reported security lapses.”

The ministry said their preliminary findings show that the attack was plotted by the Haqqani terrorist network which has safe havens outside Afghanistan.

No further details were given in this regard but the Afghan officials have long been insisting that the terror network has safe havens and their leadership councils are based in the key cities of Pakistan.

The Ministry of Interior said eighteen people were killed in the attack including fourteen foreigners and four Afghan nationals.

According to the ministry, at least nine people including six personnel of the Afghan national police Special Operations Forces were also wounded.