US Seeks to Exchange Afghan Aircraft for Assistance in Countering Terrorism

Leonardo DiCaprio could join Squid Game in the third season

Real Madrid no longer interested in signing Mbappe next season 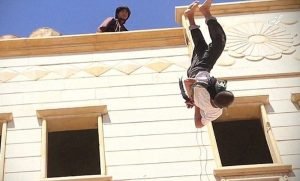 The fanatics of the Islamic State of Iraq and Syria (ISIS) terrorist group have reportedly executed a teenage boy after he was accused of being homosexual.

Reports regarding the latest extreme cruel act by ISIS fanatics have emerged from Deir ezzor province of Syria where the victim who was believed to be around 15-year-old was executed after he was thrown off from a roof top.

The boy whose identity has not been disclosed was reportedly raped by a commander of ISIS fanatics identified as Zaid al-Jazrawi.

A media activist Sarai al-Din told the local ARA News, “The boy was accused of being engaged in a homosexual relation with the prominent ISIS officer Abu Zaid al-Jazrawi.”

According to the activist “Abu Zaid was forced to leave Syria and join the fighting fronts in northwestern Iraq. The decision has been taken by the ISIS leadership.”

The eyewitnesses in the area where the execution took place have said the ISIS militants executed the teenage boy publicly and in front of a large gathering of local civilians.

The boy was reportedly arrested inside the house of the ISIS commander, who is originally thought to be from Saudi Arabia, according to MailOnline.

Homosexuality is considered an offence punishable by death, in accordance to ISIS’s radical interpretation of Sharia law.