ISIS radio destroyed in US drone strike in East of Afghanistan 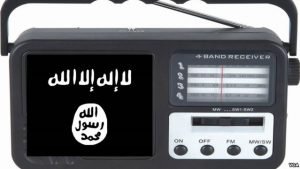 A radio station run by the loyalists of the Islamic State of Iraq and Syria (ISIS) terrorist group was destroyed in a drone strike carried out by the US forces in Afghanistan.

According to the local officials in eastern Nangarahr province, the radio station was targeted was in Kharawa area of Achin district.

Khogyani further added that the airstrikes were carried out on Wednesday and several weapons and ammunition belonging to the loyalists of the terror group were also destroyed.

The loyalists of the ISIS terrorist group have not commented regarding the report so far.

The radio station run by the loyalists of the ISIS terrorist group resumed operations months after it was destroyed in a similar airstrike.

The latest airstrikes by the US forces comes as President Barack Obama has granted broader role to engage the militant groups in Afghanistan, including the Taliban insurgents.