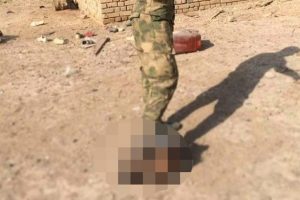 The Islamic State of Iraq and Syria (ISSI) terrorists were seen playing football with a severed head as the militants have reported seized the Yarmouk refugee camp in Damascus. (File Photo)

According to the Palestinian eyewitnesses who fled the horrors of the terrorist group, they saw heads cut off and children killed in front of their parents.

Ibrahim Abdel Fatah, a 55-year-old refugee, told AFP “We had heard of their cruelty from the television, but when we saw it ourselves… I can tell you, their reputation is well-deserved.”

Another teenager Palestinian refugee, Amjad Yaaqub, said he saw IS members “playing with a severed head as if it was a football”.

Yaaqub added “Daesh [IS] came to my home looking for my brother who’s in the Palestinian Popular Committees. They beat me until I passed out and left me for dead.”

It is estimated that 400 families including around 2,000 people fled the camp to Yalda, a neighbouring area which is also besieged by Assad forces, and 150 others escaped to regime-controlled areas.

Wesam Sabaaneh, a member of the Yarmouk-based Jafra Foundation, said around 18,000 Palestinian refugees are trapped in their houses by the clashes and heavy shelling and have no access to basic needs or medical supplies.