ISIS militants suffer casualties in US airstrike in East of Afghanistan 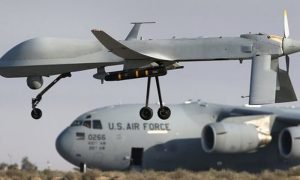 The loyalists of the Islamic State of Iraq and Syria (ISIS) terrorist group suffered casualties in US airstrike in eastern Nangarhar province of Afghanistan.

According to the local security officials in Nangarhar, the airstrike was conducted in Haska Mina district, targeting the militants of the terror group in Nari Oba area.

The officials further added that 8 loyalists of the terror group were killed and at least two others were wounded.

According to the officials, the US forces used unmanned aerial vehicle to carry out the airstrike which did not incur any casualties to the local residents.

This comes a local leader of the Taliban group was killed along with another militant accompanying him in Chaparhar district.