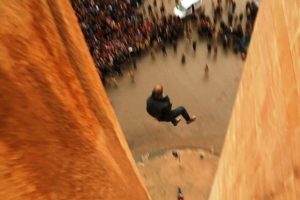 The Islamic State of Iraq and Syria (ISIS) terrorist group has formed an undercover male-only squads to set up dates with the gay men so they can lure them to their deaths.

According to the sources within the territory controlled by the ISIS militants, the special brigades of young fighters in the Hisbah religious police are using the honey trap tactic.

“They set up dates to coax them into being arrested and executed,” a member of the anti-ISIS resistance quoted by Daily Star newspaper said.

The source further added “Homosexuality is viewed as the most disgusting practice by the regime. “Jihadists have been seeking to entrap gay guys in sting operations.”

“Sometimes the men are lucky if they have money and can pay a ransom but often they are taken straight to their deaths,” the source added.

This comes as extremists belonging to the Islamic State of Iraq and Syria (ISIS) terrorist group executed a man over alleged homosexuality in Raqqa city of Syria recently.

According to the photographs which emerged online, the accused man was initially thrown from the roof of a building and was then stoned to death by the mob.

Another man was also thrown from a high building and was stoned to death after he was sentenced to death by an Islamic court in the same city two months ago.