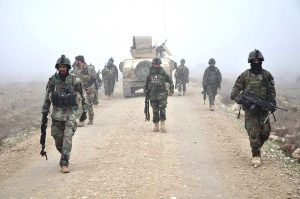 At least fifty insurgents including four loyalists of the Islamic State of Iraq and Syria (ISIS) terrorist group were killed during the joint operations of the Afghan National Defense and Security Forces (ANDSF) personnel, the Ministry of Defense (MoD) said Sunday.

According to a statement by MoD, at least 21 insurgents were also wounded during the operations.

The statement further added at least 16 of the insurgents were killed during the operations conducted in the outskirts of Tarinkot city, the provincial capital of Uruzgan province and at least three others were wounded while 2 of their hideouts were destroyed.

At least 12 insurgents were killed in a separate operation conducted in Kunduz province and 4 of them were wounded and 10 hideouts of them were destroyed, MoD said.

The Afghan forces also conducted operations in Adraskan district of Herat resulting into the elimination of 7 militants while 6 others were wounded, MoD said, adding that 4 ISIS militants were killed in Nazian and Achin districts of Nangarhar.

MoD also added that 4 militants were killed in a separate operation conducted in Waghez district of Ghazni, 2 were wounded, and three motorcycles belonging to the militants were destroyed.

At least 7 militants were killed and 6 others were wounded during an operation in Sangin district of Helmand, MoD added.