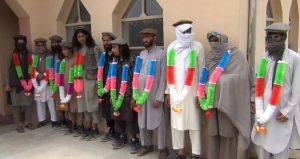 A local leader of the Islamic State of Iraq and Syria (ISIS) terrorist group’s offshoot in Afghanistan has joined peace process in Nangarhar province.

Provincial governor Ataullah Khogyani told reporters that Tawiz Khan joined peace process with his 11 fighters due to the ongoing efforts to attract the anti-government armed militant groups to reconciliation process.

Khogyani further added that the reconciliation process is being led by the Afghan Intelligence, National Directorate of Security (NDS).

According to Khogyani, the group was operating under the direct instructions of Mufti Abdullah Orakzai and the militants also handed over their arms by joining peace process.

Tawiz Khan told reporters that he is originally a resident of Bandar area of Achin district and joined the ISIS terrorist group along with his family three years ago.

The local ISIS leader said he decided to leave the terrorist group after understanding the reality and vowed to work for the development of the country by renouncing violence.