ISIS leader among 6 killed by own explosives in Nangarhar 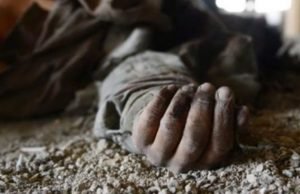 A leader of the Islamic State of Iraq and Syria (ISIS) terrorist group loyalists was killed in a premature explosion in eastern Nangarhar province of Afghanistan.

According to the local security officials, the ISIS leader was killed along with five other militants of the terror group in the restive Kot district.

The militants were planning to plant an Improvised Explosive Device around 7:30 pm on Saturday night in Badarghondi area when the mine went off prematurely.

The local officials further added that the ISIS leader killed in the explosion has been identified as Shakir who is also famous as Warak.

The anti-government armed militant groups including the loyalists of ISIS terrorist group have not commented regarding the report so far.

Nangarahr is among the relatively calm provinces in eastern Afghanistan but the anti-government armed militant groups are actively operating in some of its remote districts.

This comes as the Afghan security forces launched a clearance operation against ISIS loyalist earlier this month with the local officials saying the operations are being conducted with the support of the US forces who are providing air support to the ground forces.