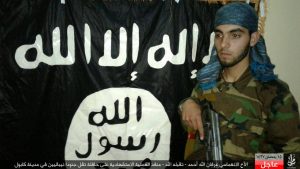 The loyalists of the Islamic State of Iraq and Syria (ISIS) terrorist group in Afghanistan have claimed responsibility behind a deadly attack on the Canadian Embassy security guards in Kabul.

The sympathizers of the terrorist group in Afghanistan have claimed that the attack was carried out by a suicide bombeق whom they have identified as Irfanullah Ahmad.

The loyalists of the terror group claim that a group of Nepalese guards working for a foreign embassy were targeted in the attack.

Taliban group spokesman Zabiullah Mujahid claimed that over 20 people were killed or wounded in the attack.

At least 14 Nepalese security guards were killed after a suicide bomber targeted their vehicle in the 9th police district of Kabul city earlier this morning.

The attack was carried out around 6:00 am local time in Benayi area of the city in the 9th police district of Kabul.

The claim by ISIS loyalists which could not be verified indecently comes as they attempt to expand foothold in the country despite ongoing operations by the Afghan and US forces against the group in the country.

The Afghan and coalition forces officials earlier expressed concerns regarding attempts by ISIS loyalists to expand foothold in the country with an aim to further expand operations in the region and consolidate operations with the terror group in Syria and Iraq.