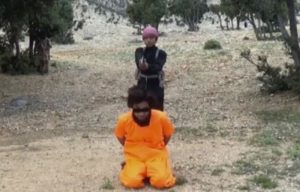 The loyalists of the Islamic State of Iraq and Syria (ISIS) terrorist group have executed at least three men in eastern Nangarhar province of Afghanistan.

The terror group claimed that the men were arrested during an operation by the fighters of the group and they belong to Taliban group.

The group initially released the pictures of the men in social media and later issued more pictures which purportedly shows the execution of the men.

The three men are shown in orange jump suits as they are forced to kneel in the ground while a child is executing them with a pistol.

The group also released several other pictures which purportedly shows coordinated attacks on several outposts of the Taliban group in Nangarhar province.

This comes as the loyalists of the terror group released several pictures which purportedly showed the execution of at least three individuals allegedly for having links with the Taliban group.

In the meantime, the loyalists of the terror group launched a major attack on police check posts in Kot district late last month.

The latest major attack by ISIS loyalists in Kot district comes as the terror group received major blows during the recent months as a result of the Afghan and US forces routine operations.