ISIS commander Meera Jan killed with his 13 fighters in Nangarhar 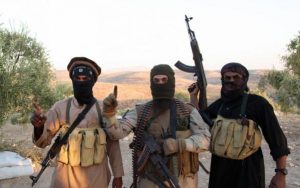 A commander leading the loyalists of the Islamic State of Iraq and Syria (ISIS) terrorist group was killed during an operation in eastern Nangarhar province.

According to the defense sources, the ISIS commander was identified as Meera Jan and was killed together with his 13 fighters.

The sources further added that the operation was conducted in Kot district of Nangarhar province where the loyalists of the terror group are actively operating.

At least 5 others were also wounded and various types of heavy and light weapons were destroyed during the operations.

The loyalists of the terror group based in Afghanistan have not commented regarding the report so far.

This comes as local officials earlier said at least 31 loyalists of the terror group were killed during the ongoing operations in Nangarhar province.

The Afghan forces are regularly targeting the loyalists of ISIS terrorist group to curb their insurgency activities as they attempt to expadn operations in Afghanistan.

The US Forces in Afghanistan are also targeting the loyalists of the terror by conducting airstrikes.