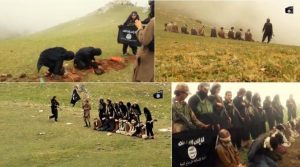 A commander of the loyalists of the Islamic State of Iraq and Syria (ISIS) terrorist group who was involved in the barbaric execution of at least 11 civilians has been killed in an airstrike in Nangarhar province.

Provincial governor’s spokesman Ataullah Khogyani said the airstrike was carried out by the foreign forces late on Friday night in Achin district.

He said the ISIS commander was identified as Jangal Pacha and was killed along with 7 other ISIS militants in the airstrike.

The loyalists of ISIS terrorist group have not commented regarding the report so far.

The horrific execution video was released earlier in the month of August last year which purportedly showed the ISIS loyalists forcing the men to sit on landmines and subsequently detonating the explosives.

The loyalists of the terror group claimed that the men were supporting the government and US forces and were looking to coordinate drone strikes against ISIS militants in Nangarhar.

The death of Jangal Pacha comes as both the Afghan and US forces have stepped up raids against the loyalists of the terror group in this province.

The Afghan National Defense and Security Forces (ANDSF) launched a major operation against the terror group last week days after President Ghani ordered to root out the terrorists from Nangarhar.